The new sundress, the bright sunny day, the amusement park, nothing could brighten her attitude. Her favorite toy had been redistributed to her favorite cousin, Stacy. She couldn’t help hating him a little bit today. It was the ‘Fisher Price Little People Castle Play Set’ and her mother had informed her (on her birthday…) that she was too old to play with it. It had been packed up that morning to live somewhere else. Charlie was depressed.

“Charlotte, you are thirteen years old today and too old to be playing with dolls. It’s time to spend your free-time on

learning to run a brush through your hair,

paying some attention to the disgrace you call nails,”

her mother, Claudette, had scolded. Charlie had bowed her head in deference to her lecture. Thirteen in name only she thought looking down. Her sundress and long hair were the only things securing her place in the pantheon of womanhood. Otherwise, she was all flat plains and angles.

She was supposed to be more special, being a dragon child. The lady who lived up the street from her grandmother, Evelyn, had taught her that. The Chinese witch, that’s what everyone called her. Charlie, however, knew she wasn’t Chinese. While she had been born in Hong Kong and owned the local Chinese restaurant, her family was Japanese. She supposed she really was a witch.

It had been Evelyn’s granddaughter, Taura, that had told her this. Her two sisters, Momoko and Ryoko, had sat in solemn silent agreement pouring imaginary tea into little cups. They had all draped themselves in old pieces of fabric (towels, blankets, table clothes, and curtains) artfully tied up in what they imagined to be kimono’s. They were playing at being geishas having a party. “My grandmother is a witch. And, since they are always together, yours probably is as well”, Taura shared. Evelyn’s grandchildren often recruited her for their elaborate tea parties – being that they were all more-or-less the same age. “I supposed that means we might all be witches. Everyone knows it runs in families”, she continued mysteriously.

Charlie thought this was probably true as well. Her grandmother and Evelyn were always collecting herbs together and making special drinks. One time, when she was supposed to be asleep, she had actually heard Evelyn tell her grandmother to collect some of her hair and nails when she died so that she could come back and visit her from the grave.

It hadn’t bothered Charlie. The thought of her grandmother being a witch did not worry her, upset her, or concern her. Both women were larger than life to her. It made sense that they were also witches. Besides, it was Evelyne that had given her the castle play set. She had found it at a garage sale – practically new. She said she was giving it to her because she was a dragon and the playset had a dragon in it. That’s how she found out that she was born in the year of the dragon and that she was special.

It was the pink dragon that was breaking her heart to part with. She could part with the whole play set but she would rather keep the dragon. What if Stacy banished the dragon to the cave at the bottom of the toy castle? He might not know that Puff was the ruler.

The amusement park was supposed to be a special treat, but Charlie couldn’t stop sulking and being distraught over Puff. Even as she got on to ride her favorite character of the carousel, a green dragon, she was still melancholy. The carousel held no magic today, but her green dragon did. In her mind this dragon was also Puff, but grown. She always supposed her little pink dragon at home was Puff as a baby.

There was no conflict yet in her developing mind that Puff was different at this park than he was at home. She had tried to explain it to her mother once but her mother had insisted that it was not possible to be in two places at once; and, furthermore, you could not be a child and an adult at the same time.

Yet Charlie knew that what she had told her mother was true. All she had to do was look in the mirror and see that she was someplace else at the same time and an adult as well as a child – all at once. It seemed that getting older made things harder to understand.   With the loss of her dear pink dragon, (on this the day of her birthday) getting older didn’t seem like such a great reward. She wondered ‘Is that all there is? Would it just be disappointment from here on out? Wasn’t she a dragon and possibly a witch? Surely her life was meant to be more special.’

She looked up just in time to see Stacy getting out of the car. She could see the parking lot from here. She decided today – she would find a moment to pinch him – hard. The thought made her smile. 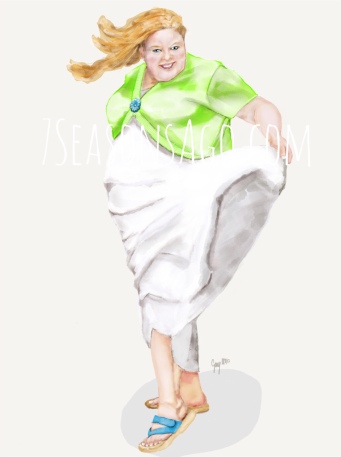 She was on the run. Traveling as fast as she could, she had taken a job on the other side of the country.  Two weeks from now (at forty-seven years old) she would start her new position as the VP of Science at a Biotech start up and planned to be busy forgetting everyone she used to know.  Not that she had much choice.  Six months earlier she had diagnosed herself with frontotemporal dementia.  Dr. Claudette Deering was on the run from herself.

Two years ago she had started to notice changes in her mood.   At first it seemed a euphoric second youth had taken her.  Everything was more intense.  Food had more flavor.  Music moved her like a school girl.  Even colors had more depth – like poetry.  However, the science part of her had started to calculate the changes and was busy translating the behavior in to symptoms – symptoms that were familiar to her as a doctor.  A small part of her brain had quietly started documenting her behavior flagging them for her conscience mind.  She started keeping a journal of her days, her interactions, and behaviors.

When she felt she had enough evidence, she had her suspicions confirmed by a colleague under the pretense of seeking advice for a patient. FTD, her friend, colleague, and fellow neurologist had confirmed.  “The last item you shared confirmed it for me.  I would have to see the patient for myself to make a formal diagnosis, but this clearly shows the patient’s lack of empathy and loss of interpersonal skills.”  The last item had also confirmed it for Claudette.  It was the recounting of a moment she had experienced with an employee of hers.  She had been talking to the employee and while they were speaking she had picked up a picture on the employees desk to examine it and then had started to poke holes in the faces with a pin she had freed the photograph from that had kept the picture attached to the employees pin board.

Later that day, while she was updating her journal, she had recalled the incident. While she was not upset by her behavior,  she did understand that this was proof she had been looking for.

There was no use seeking a second opinion formally and having herself subjected to a battery of tests. The doctor was sure to revoke her license immediately and start the process towards putting her on long term disability.  She would then be pressured to give power of attorney to her closest relative – in this case her daughter.  Her life as she knew it would be over.  As a neurologist she was well aware of the changes she was going to face and the loss of freedom that would come with them.  She was determined to make the most of the small time she had to still be her.

Tonight she was still free. She sat under the starry sky on the tailgate of her Chevrolet Suburban watching the fire she had made at her camp near Bodega Bay in California.  The beach was about 20 miles from Santa Rosa – the city of her new job.  Her condo didn’t close escrow until a week from now and her new career would start a week after.  For seven days she would enjoy the anonymousness of being a suburban beach gypsy.  For the first time in her life, she was unconcerned about what would happen next.  She did not have a daughter to raise, she did not have patients to attend to, she did not have a board to answer to.  Ironically, with everything going for her, she didn’t have much of a future.  She was living in the moment.  She spun around in glorious abandonment.

“Nice moves”, she heard from a voice in the dark. A young man entered the perimeter of her light with a banjo in hand.  “There is a drum circle tonight at the beach in celebration of Mistress Luna”, he said pointing at the full moon gracing the sky.   “Care to join me?”

Claudette briefly wondered how much of the night cover had disguised her age. But she felt young, impulsive, and carefree – all symptoms of her disease her mind amusedly reminded her.  “I would love to” she replied.