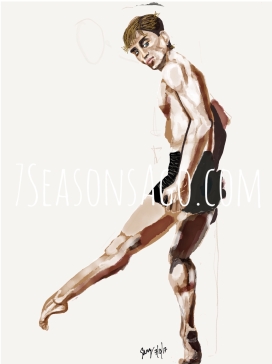 Thomas sat sewing the elastic straps to his technique shoes on the hard stage of the empty theater. The cold ran right from the floor through the thin fabric of his warm up clothing chilling his underweight body – even more than the morning air. Morning – if you could call 11:30 morning. Let’s face it. This town was just fucking cold he thought with resignation. He wasn’t even sure where he was. He hadn’t used his passport in a while so he assumed they were somewhere in the continental US. Tennessee? Alabama? He vaguely recalled someone calling this the red neck tour.

He hadn’t made any friends so he couldn’t be sure and he really couldn’t be bothered to ask anyone.  They were all uptight modern dancers in a touring show funded by some grant or other. Rehearsals had revealed he had the strongest technique of anyone in the company and this hadn’t endeared him to anyone. They were all wondering why he was slumming with them.

The reality was there weren’t a whole lot of offers waiting for him. He had an offer from a small  regional ballet, an off Broadway musical, and this.  He started dancing to see the world. The touring modern company had been the winner.

He was the first one ready for barre. There was no coffee and his GPS showed the closest café 3 miles away. He sat wondering how he was going to make it through warm up when a fellow dancer (he assumed due to the leotard he was wearing as he couldn’t recall ever seeing him before) sat next to him and handed him a cup. “Black right?”

“Thanks”, said a humbled Thomas. He sat there – adjusted his attitude, put his shoes aside, and walked to the center of the stage. “Any advice?” he asked looking back crouching in the ballet’s signature pose and pointing his foot.