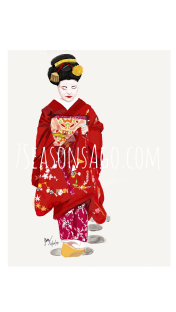 Taura was at the flower market selecting the best blooms in preparation for her sisters’ arrival for their girls’ weekend. Ryoko was flying in from Los Angeles and she would pick her up at the airport tonight. Momoko was driving from her foothills farm and would either accompany her to the airport or meet them at Taura’s house depending on traffic into the city.

She caught something out of the corner of her eye and looked up to see Ryan waiving at her. She was surprised to see him so soon after running into him at a flamenco event just last night. He had been with a very beautiful woman she remembered with the jealousy you feel towards all people who might be considered more attractive than you. She dismissed the thought and smiled and waved back.

It didn’t matter what ever woman Ryan was with because she was pretty sure the dashing soap opera star was gay. At least she assumed so as he was usually seen with an equally attractive flamboyant dancer.

Funny how she was always running into him – this was the joy and sorrow of living in San Francisco. Sometimes you found yourself living parallel with strangers. So much so that you might assume that you actually knew them. Last year she had started a parallel course with Ryan and after the 5th time randomly seeing each other (this time in line at a coffee shop) he had introduced himself to her.

They had just begun a conversation when his dancer friend had cut them off as he simultaneously seized his coffee from Ryan’s hand and gave Taura a death stare. She could almost visualize him breaking a bottle and threatening her with it saying something like “I’ll cut you!” The term “cock-blocked” came to mind as she suppressed a giggle waving them good-bye and watching them depart to their morning.

“Those are beautiful”, he remarked bringing her back to the present.

“Thank you, my sisters are visiting for a girl’s weekend and we are going to spa, then dress up, arrange them, have tea, and perform for each other. It’s part of our ritual”, she said surprised at herself for her casualness at discussing personal information with a stranger. Ryan must have thought so to because he just stood there for a second trying to come up with a response.

“Wow, I now actually know something about you…” he said with amusement. “You’re no longer just a single stream I occasionally cross”

“No” Taura flirted back “Many lakes; many rivers” she tossed out trying her best at eastern wisdom and mystery. She seized her cue and exited taking her flowers to the cashier – Hoping (wishing?) he was enjoying the view as she walked away.